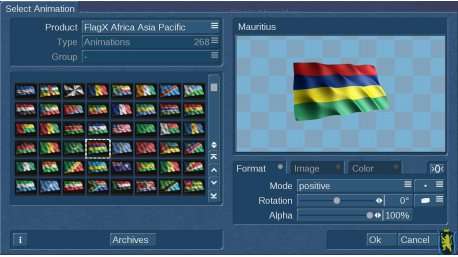 FlaggeX (3) Africa, Asia, Pacific covers those regions of Africa and Asia and the Pacific States with 268 animated flags from (two variants).

The FlagX collections include a large number of high-quality, animated flags and background panels. A special effect from the package can render them upon your video scene.

Think of a fluttering flag in the wind as an introduction of your holiday trip and moving background plates as an eye catcher for important texts - all this and much more is now possible with the FlagX collections.

All flags can be placed in a variable size on the video material. Building the objects, the creator placed the focus on a broad field of possible applications, in combination with Columbus 3 or titling.

Since all animations are stored in the BogartSE ImagePool, they can also be varied. Thus, for example, it is easy for your desired object to adapt the colors, and perfectly fit it to the background material. The individual FlagX packages can be used in both SD as well as HD projects.