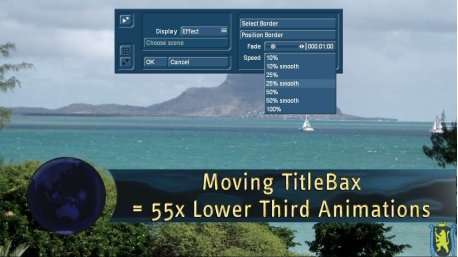 The popular lower third titling effects from the software product TitleBaX have now been expanded with animation capability in the Moving TitleBaX product.

This software consists of 50 moving images and a matching long-term effect. The sequences are designed so that they can run in a loop.

This product was made with the concept of laying down texts from the titler onto a lower third animated graphic box as seen on many television shows. Render a Moving TitleBaX effect on a scene and then add your texts from your Titler on top of it.

Moving TitleBax works both in SD and HD projects, and supports 4:3 and 16:9. Since the HD animations can also be used down-scaled, this software is also particularly well suited for users who shoot with a DV camcorder in 16:9.