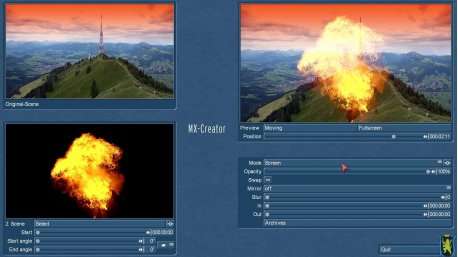 With the Multiple Exposure, which is actually known from photography, different single images can be merged into one overall picture.

This technique is also commonly used in feature films. With the new add-on software MX-Creator, this type of effects can now also be realized with Bogart.

It is possible to superimpose two video scenes, or a scene and a pattern / gradient. The opacity of the second overlapping scene can be freely adjusted.

To use the effect even more creatively, there are ten different modes for effectively mixing the two layers.

It is also possible to set a rotation angle of the overlaid scene with start and end freely, which even animates standing elements. Adjustable fade-in and fade-out times complete the effect rendering.

The more you experiment, the more interesting and diverse applications you will find.
A program with a lot of possibilities, which also has to be explored a bit.

18 other products in the same category: