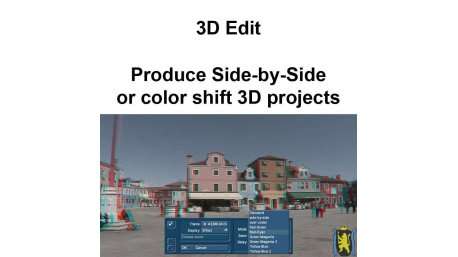 With the 3D edit software your can create your own three-dimensional film projects with Casablanca.

With the 3D edit software your can create your own three-dimensional film projects with BogartSE.

In 3D editing - Bogart is useing the so-called "side- by-side" method. Two different images are compressed for the left and right eye deposited side by side in an image. Almost all existing effects - even from older add-on packages - are rendered separately for the views of the two eyes, so the 3D effect is maintained.

3D scenes in anaglyph method ("red-green", "green-magenta", etc.) can be also created and managed with BogartSE. But a further processing of such scenes is not possible.

There are several ways to get video footage in 3D:

To view this 3D scenes and ultimately the whole film you need in the ideal case a 3D-compatible TV set with 3D glasses for the spatial perception. These glasses are available in various designs and shapes for the mode you selected at your dealer. For eyeglass wearers, there are 3D glasses as intent, which can be placed in front of your own glasses.

Minimum requirements: Casablanca, DVC, Enterprise MAX HD or Streamcorder with BogartSE 3.2a or newer (not compatible with T- models). Depending on the 3D mode it may be necessary to use a two - monitor configuration.

20 other products in the same category: