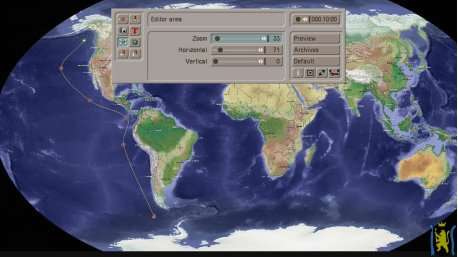 This collection contains 91 maps of the entire earth. Each in three variants for use with the Columbus software. There are 11 maps from Europe, 13x maps from Africa, 28 maps from America, 31 maps from Asia, 7 maps from Australia and an overview map from the whole globe.

This collection contains 91 maps of the entire earth. Each in three variants for use with the Columbus software. There are 11 maps from Europe, 13x maps from Africa, 28 maps from America, 31 maps from Asia, 7 maps from Australia and an overview map from the whole globe.

The maps are minimum 3.000 x 3.050 pixels and maximum 7.000 x 5000 pixels, which enables Columbus to make long, smooth movements instead of static maps. All maps have ideal colors for video usage.

The XXL Maps of Europe cover the complete European continent, in realistic 3D-Look with high Pyrenees summits and deep alpine valleys, gently corrugated Mediterranean and unfathomably dark Arctic Ocean. With Nordic forests, lush green land and rather dry areas in the Mediterranean. With deep fjords in Norway, glossy Finnish lakes and the icy northern Ural. With the towering Mount Etna in Sicily, the large salt-lakes in the adjacent North Africa and the dry highlands of La Mancha in Central Spain.

The Digital XXL maps of Africa cover the black continent with the high-towering, barren highlands of Ethiopia and the deeply cut green Valley of the Nile, with the dense jungle on the Congo River and the barren yellow-brown Sahara, rare enough loosened up by the green dots of the oases. Numerous Rivers and streams of rich vegetation in the large reserves of Kenya and Tanzania are changing further south in drying rivers in the light green-yellowish-covered vast savannahs of South Africa.

The XXL Maps of America cover the entire American continent, with high Andean peaks and a deep Grand Canyon, juicy lush jungle at the Amazon and barren yellow gray-brown desert in New Mexico. With gentle light blue waves in the Caribbean and the unfathomable dark blue Beauford Sea north of Alaska. With shiny salt lakes in the maroon-gray Atacama Desert and the gentle green hills landscape in northern Venezuela. The barren of Mato Grosso in Brazil you will find as well as the wide light green savannas in the Midwestern United States, the dark coniferous forests of Canada as the meager light green rocky islands of Patagonia.

The XXL Maps of Asia cover the entire Asian continent, with the highest snowcapped peaks of the world in the Himalayas, the vast dry high plains north of the mountains, the lush green jungle in Thailand and the barren yellow gray-brownish Gobi desert in the west of China. With soft blue waves at the coast of Bali and the cold dark blue sea in the northern Pacific. With the silted Aral Sea and the fertile plateau in northern Afghanistan, the adventurous Silk Road and the green oases in the hot desert of Saudi Arabia. The rather cold barren northern Siberia can be found as well as the fertile areas in southern India, the Great Wall of China as well as the cheerful-green-blue islands of the Philippines.

The XXL Maps of Australia show - last but not least - the fifth continent, with gentle light waves crashing on the shores of the serene and green colored southeast Australia beat, while 2000 km northwest salt lakes in the red-brown desert
Central Australia shine. In between is a look at slowly dwindling rivers that give Australia a very different coloring than in all other parts of the world.

You will find many amazing details, and still the maps remain clearly, are not as "bloated" like a satellite view or from the Atlas filmed map.

And here are the XXL-Maps (with pixle size), all in one collection:

18 other products in the same category: